Exclusive First Time Ever Interactive Ghost Hunt and Live Paranormal Investigation of Alabama’s Oldest Standing Bank! Join in this Halloween Season Event and get to be part of the actual investigation using state of the art paranormal investigation equipment like you see on tv. Be part of this exclusive experience as TV Personality , Paranormal Investigator and Psychic Medium Lesley Ann Hyde and her team of professional paranormal investigators The Southern Ghost Girls lead You on a Halloween Season Adventure You Will Not Forget! The Southern Ghost Girls Tours is making this exclusive stop at The Old State Bank for only one weekend on their 2021 Paranormal Palooza Halloween Season Tour! It is a location Founder Lesley Ann Hyde has wanted to investigate for the paranormal for years ! Only the best and hauntingly historic venues are chosen for the Fall and Halloween Season Paranormal Palooza Tour and The Old State Bank is definitely one of the top historic venues in the State of Alabama! The Old State Bank is rumored to house two ghosts that people have seen throughout its existence. “The Weeping Lady“ and “The Lady in Blue “ have intrigued people for many years . There is a special antique mirror , as well as The Bank Vault, that was used as an Operating Room during the Civil War , that has been the talk of haunted tales passed on by people too through the years!

The team will throughly investigate The Old State Bank to see if these Spirits of the Past do exist and see what other spirits or ghosts may still roam inside the walls and the courtyard. This Venue is Truly a Historic Gem that must not be missed ! Don’t pass this opportunity by to actually get to be part of this first ever public investigation of Decatur’s Old State Bank. You will be sure to find it spectacular , amazing and spooky fun during the 2021 Halloween Season . It is recommended to get your tickets early as it will definitely be a sell out event of The Halloween Season!

Through more than 178 years of often turbulent history, the Old State Bank has survived as a proud monument to Decatur’s past and the development of banking in Alabama. Built in 1833 to house the Tennessee Valley branch of the state bank, the bank was chartered as the Branch of the Bank of the State of Alabama at Decatur, and is now known by its common name as the “Old Bank.” The building is important not only for its rich history associated with its diverse use, but also for its contribution to the architectural history and landscape of Alabama.

The decision to locate a branch of the state bank in Decatur was one of the first events in the town’s early history to lift Decatur from relative obscurity and give it a special role in the state. The Decatur bank opened on July 29, 1833. The Decatur bank reported a profit of $84,028.22 in its first year of operation. Unfortunately, the good times were short-lived, as a nationwide depression in 1837 and other factors contributed to the decline of the state banks. Despite attempts to improve and reform and improve the state banks, the Decatur bank franchise was revoked by 1845.

After the bank failed,  the building saw diverse use. During the Civil War, the Old Bank served as a Union army hospital, and is one of only a handful of buildings to survive the town’s destruction during the war. Scar marks on the bank’s columns bear witness to the skirmishes fought nearby. From 1881-1902, the First national bank of Decatur occupied the space and helped to finance the town’s regrowth in the aftermath of the war. In the twentieth century, the bank was used as a boardinghouse where a quarter could buy a meal and a bed. In the 1930’s, the building was renovated as a civic meeting space. The building was later donated to and used by the American Legion. In the 1960’s,

Unique features of the Old Bank include a first floor banking lobby complete with the original walk-in vault and a replica of the teller’s cages. The second floor apartment area is furnished with antiques from the 1830’s, and gives a glimpse into life in the early Tennessee Valley.

Check In For The Event will Start at 6:30 pm at The Southern Ghost Girls Check In Table. Souvenir Gear Available. There will be a Meet and Greet with photo opportunities during Check In and before the actual investigation starts .

No Refunds , but if notification is given prior to 24 hours of the event you will be given a credit to use at a future Southern Ghost Girls Tours Event. Notify [email protected]

You may bring cameras and personal recording devices but no weapons.

May not be suitable for very small children.

** We will also be taking up donations such as Cat Food and Cat Supplies for a local Pet Adoption Center called Cora’s Critters in North Alabama. If you donate an item you will get a $5.00 off coupon for your next Southern Ghost Girls Event. 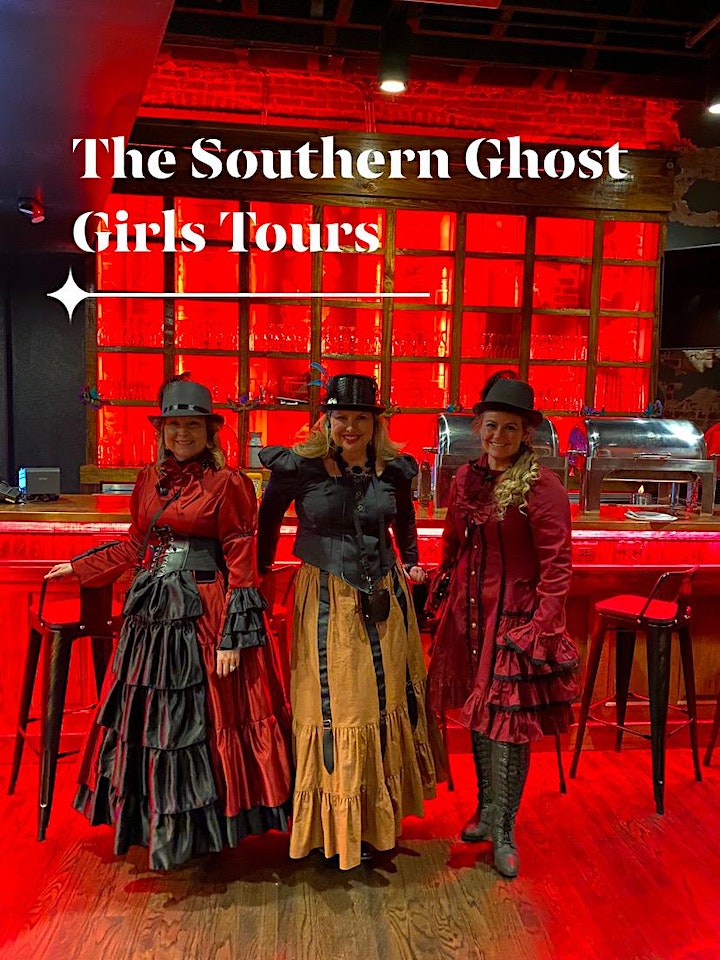